Edit
watch 01:36
We're Getting Mutants in the MCU - The Loop
Do you like this video?
Play Sound

Megan Follows is a Canadian actress, best known for her role as Anne Shirley in films by Kevin Sullivan.

Megan was born on March 14, 1968, in Toronto, Ontario, to Ted Follows and Dawn Greenhalgh as their youngest child. She was raised there along with her older siblings - brother Laurence and sisters Edwina and Samantha. Megan's parents were part of the founding members of Canada's summer theatre culture and Megan began acting as a toddler with her siblings.

Megan's first acting job came at the age of nine, when she landed a spot in a commercial for Bell Canada. She was directed to make an impudent gesture out of a school bus window - like sticking out her tongue - but ended up making a rather obscene and adult gesture instead.

After her parents' divorce at the age of 11, Megan moved to Los Angeles to attend school and act. She quickly found steady work in Canada, appearing in a few TV series such as Matt and Jenny, The Mating Season, The Baxters and The Littlest Hobo, in which she guest-starred with her entire family in a two-part episode. She also starred in the short film Boys and Girls, which won an Academy Award for Best Short Subject.

Megan's breakthrough occurred when she was cast as Anne Shirley in the 1985 film Anne of Green Gables directed by Kevin Sullivan. The part of Anne was a coveted role that she won over 3,000 other young girls when director chose her despite early worries during the audition process that she might be too old for the part.

"It was not an easy character. She's iconic, so people think they know what she is, but she was multifaceted. She was not the appendage of a male character; she was number one. She had a lot of character defects that were fantastic to play. She had an uncontrollable temper; she was a compulsive talker; she had a rich fantasy life - all of which were products of the fact she was an orphan and raised in undesirable circumstances. And it is her intellect, her wit which turns that around and turns the community around. I think that is why that is why that story has had lasting power."
—Megan about her film character, Anne Shirley.

Follows most recently starred as Catherine de Medici on Reign, a historical drama TV series based on the early life of Mary, Queen of Scots. 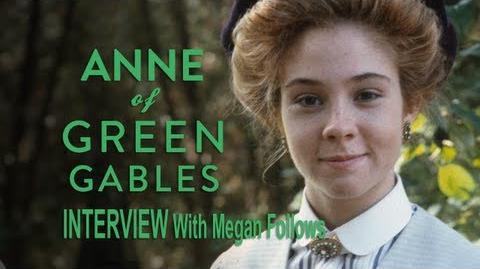