Anne of Green Gables Wiki
Register
Don't have an account?
Sign In
Advertisement
in: Stub section, Season 2 (Anne with an E) episodes
English

"I Protest Against Any Absolute Conclusion"

"I Protest Against Any Absolute Conclusion"

"The Determining Acts of Her Life"

"Memory Has as Many Moods as the Temper"

"I Protest Against Any Absolute Conclusion" is the sixth episode of Season 2 of CBC's Anne with an E (2017–2019) and the 13th episode of the series overall. It was written by Naledi Jackson and directed by Ken Girotti. It premiered on Netflix on July 6, 2018.

Anne faces the world with a shocking new look while the town preps for its annual Christmas pantomime. Gilbert and Bash join the Cuthberts for dinner.

Anne Shirley: When you were younger, what part did you play in the Christmas Panto?
Matthew Cuthbert: Oh, no, I didn't play a part.
Anne: Did you sing carols?
Matthew: Oh, no. Now in you get.
Anne: Matthew? Did you have a happy childhood?

Anne: I wish I could stay up here forever and never show my face again.
Matthew: I used to wish that, too. But it's not in your nature... like it is in mine. You're too brave to hide away.
Anne: You think I'm brave?
Matthew: I admire you for it. You just... you jump right in, both feet.

Rachel Lynde: Let's see menacing devil lobster! What on earth is that? Thomas Lynde, you look as though you're about to tickle someone.
Thomas Lynde: You said menacing.
Rachel: Exactly. So go on, then. Menace.

Anne: You're Sebastian. Oh, how thrilling. I've read so much about the ancient kingdoms of Africa and the Moors of Spain, but I've never actually met a colored person before. Or not one of your complexion. Your skin is absolutely extraordinary. It-it's a rare pleasure to meet you.

Anne: I need a shovel. Please? It's a matter most urgent. Josie Pye just fell gravely ill.
Marilla Cuthbert: What do you intend to do with it, bury her?

Rachel/Queen Victoria: Today, in the wake of my very own Diamond Jubilee, I hereby bless all of Avonlea! God bless you all. And God save me! 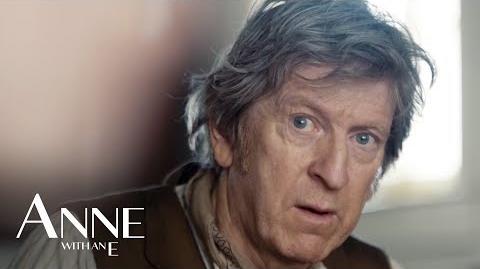