Anne of Green Gables the award-winning series presents 26 entertaining and educational episodes. By watching this series, you are able to follow Anne as her out of control imagination leads her through many different adventures, which demonstrate important lessons in loyalty, resolving conflict and problem-solving. So why not join Anne and her friends in both difficult times and lots of laughter in this animated, family friendly version of Anne of Green Gables that you are sure to enjoy.[1]

The opening sequence of the series begins at the orphanage. The next day, Anne decided to pack her stuff up, and starts to run out of the orphanage. As she rans faster, and faster, and then she lifts herself off the ground, and magically began to fly. Anne flies through the fields, and off of the cliff. She was very happy, that she is 50 feet up high. She holds her hat on her head, as flies up into the sky.

This song is the introduction to every episode and is sung by Bryn McAuley.

There have been four novelisations of Anne of Green Gables: The Animated Series published.[2] 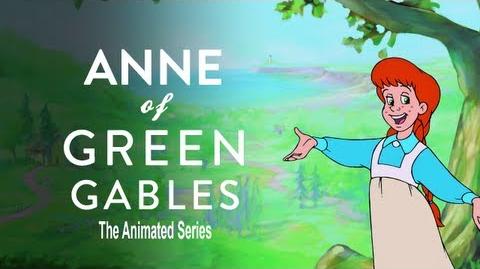